A Productive Day Off.

Lately my Sunday off has meant reading  novels and not much else. I'm a bit brain dead, what with working long hours and this heat. But, it drives me bananas too when there are so many jobs outstanding!
So, I resolved that in spite of the heat and the lethargy, I was going to knock off two important domestic creative projects.
1) Recover the foot pouf. MrC and I made the pouf in 2002 and it has been recovered once before this, in 2008. That cover was fabulous, but it had ended up looking like this: 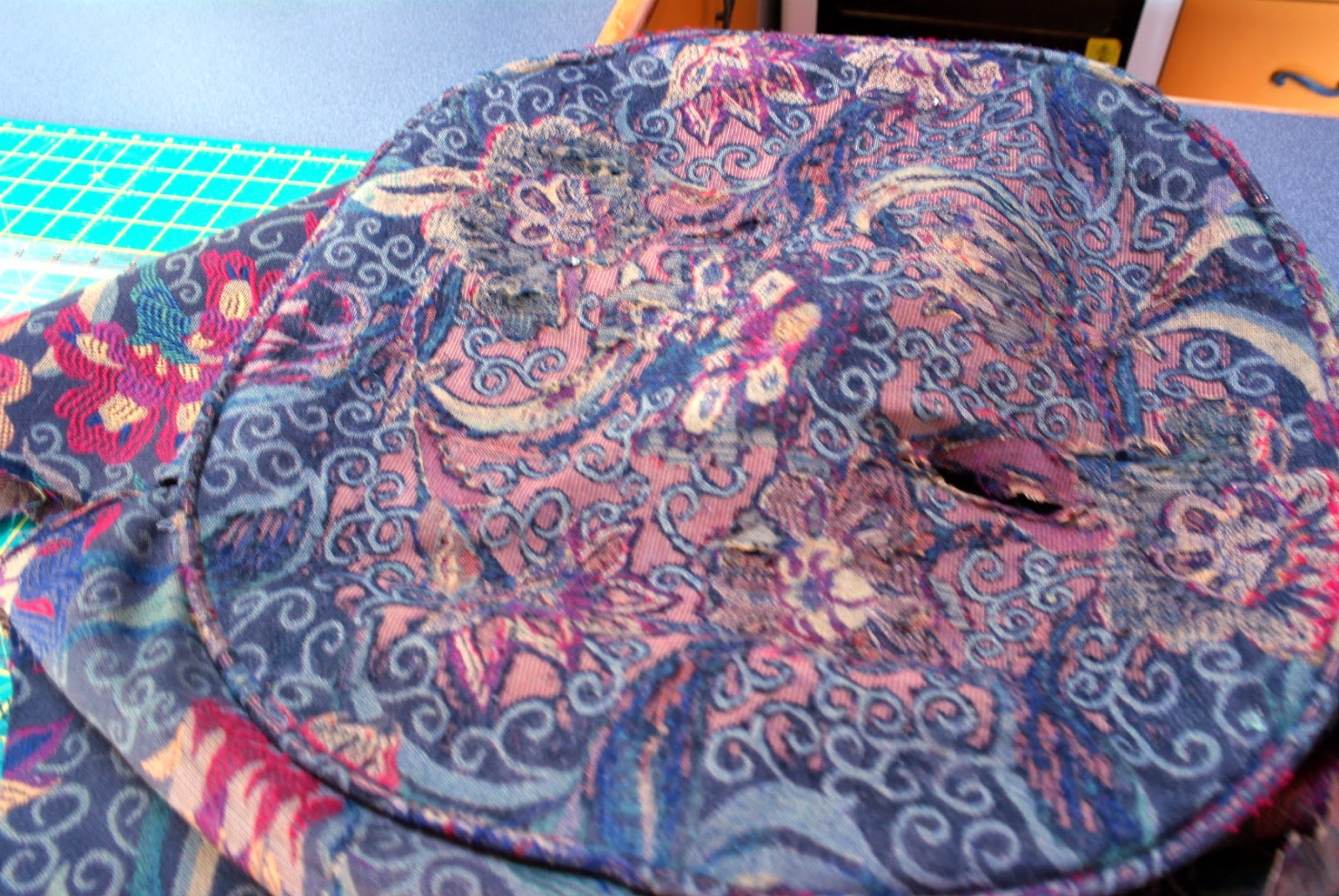 SO threadbare - look at the red flowers around the sides - most of the red had faded and worn off the top. And yes, that is a gaping hole. :(
The new fabric we bought from Graham and Sons in Martinborough. It was a short end and we got it for a fraction of the usual price. I love it SO much! 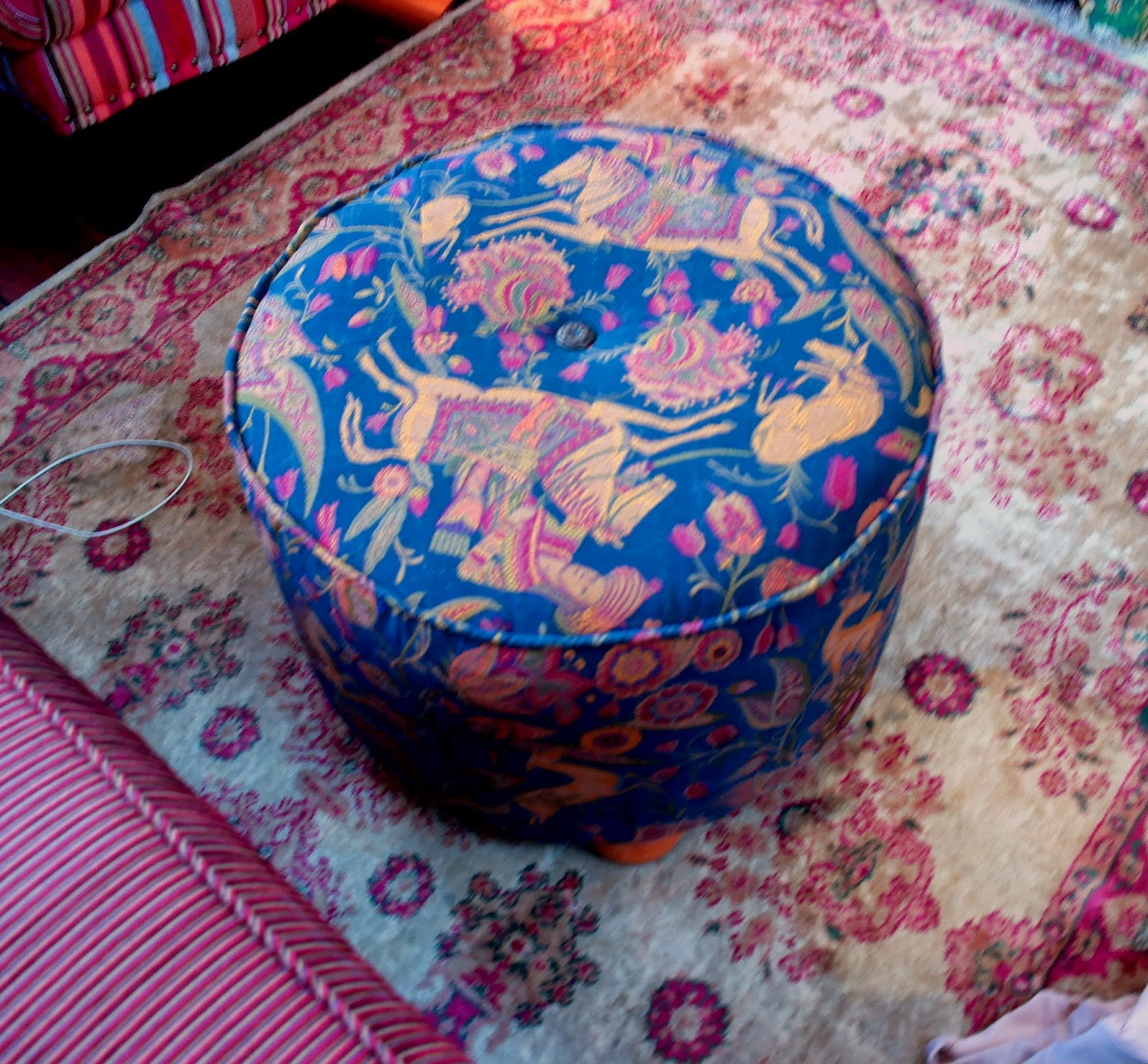 It has Tartars on horses! And goats! And flowers as big as the Tartars on the horses and the goats!!! And of course, it is red and gold and black. LOVE.
It looks blue in the evening light but it is black with lots of rich golds, olive greens and of course, reds.
New pouf has a button on the top, a pretty antique bronze one. I hope it lasts longer than the previous button. The top is made of three pieces patched together on account of lack of fabric. Two halves, then one I sliced and swapped over so the Tartar was balanced with his bro across the other side. I did some illusory pattern matching and it all seems to work very well!
The piping is a bit wavy - it ought to be cut on the bias but there simply wasn't enough fabric. Ah well.

2) Lampshades! this is my third attempt at shades for over the kitchen bench. The first wallpaper ones were just appalling. The second ones looked awesome but the fabric was so dark, it didn't let the light into the room! A triumph of style over substance!
And so, in a different and more recent trip over the hill, we ended up at Emporos in Greytown and I simply had to buy this French linen. 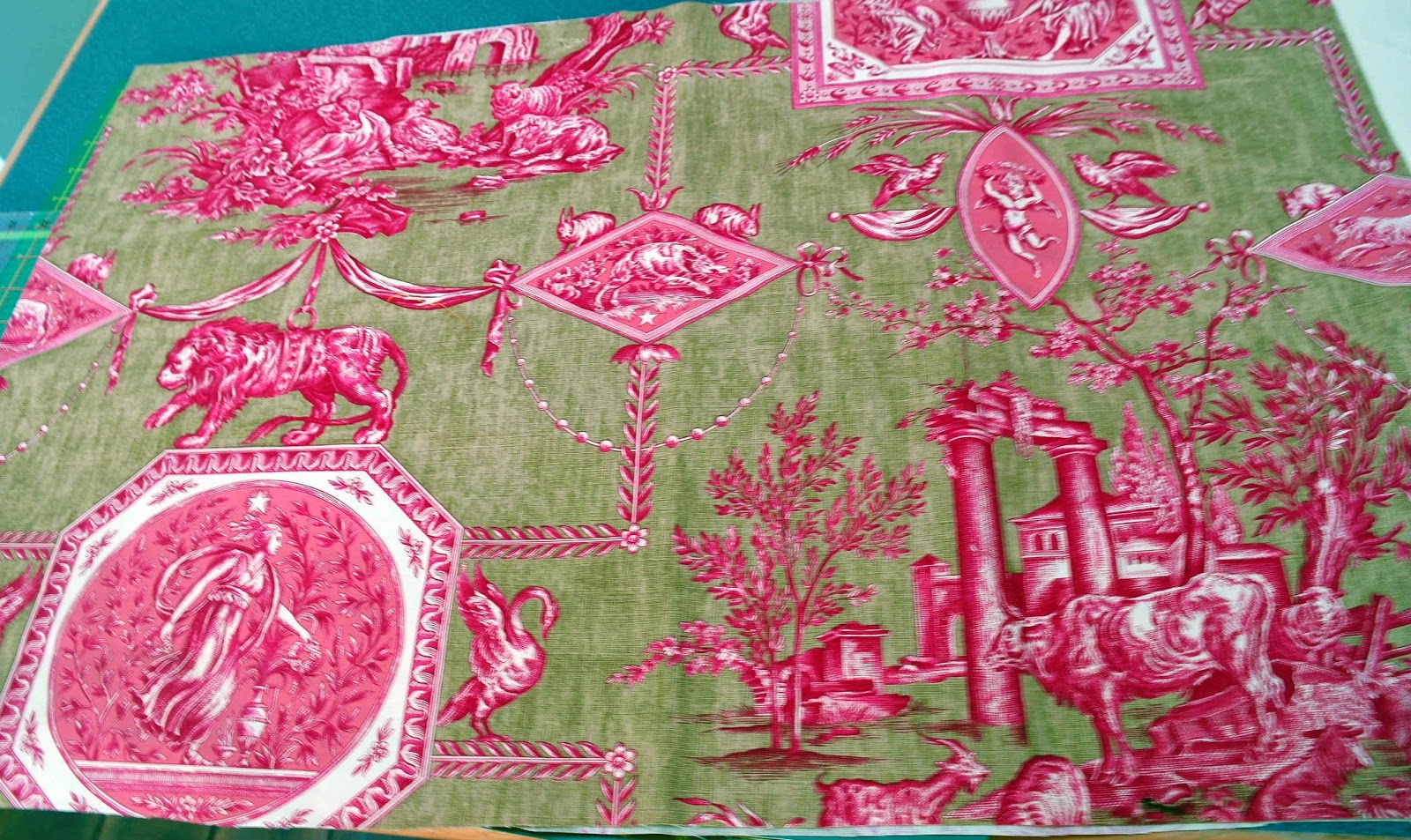 SO in love. They sell remnants from France and so have things no one else seems to.
This third time, I made the shades 18 inches in diameter (previous ones were 15) to allow for maximum light.
My favourite part of this fabric is actually the in between bit which looks like a flow diagram drawn by a crazy botanist. And has lions and monkeys! 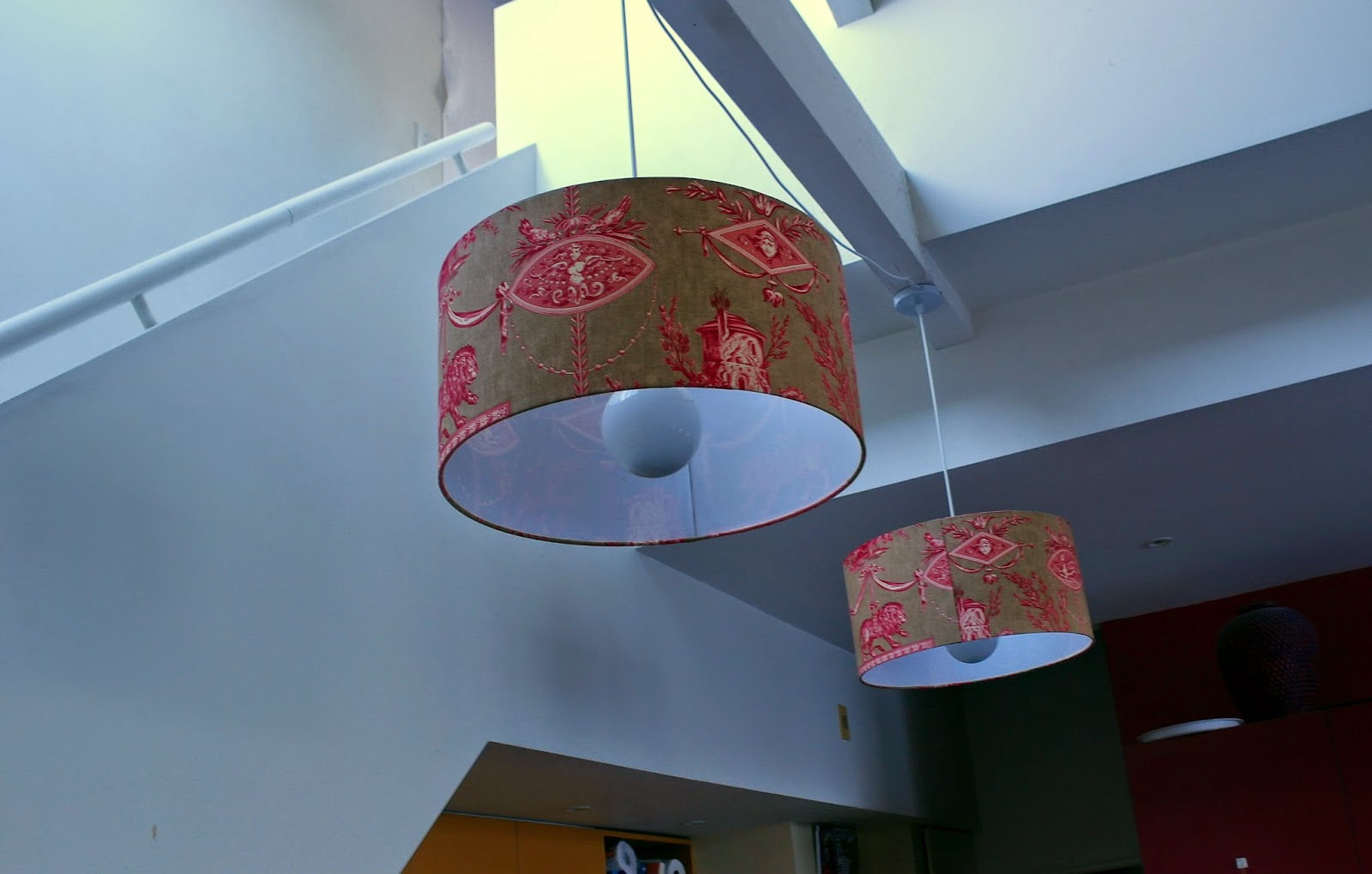 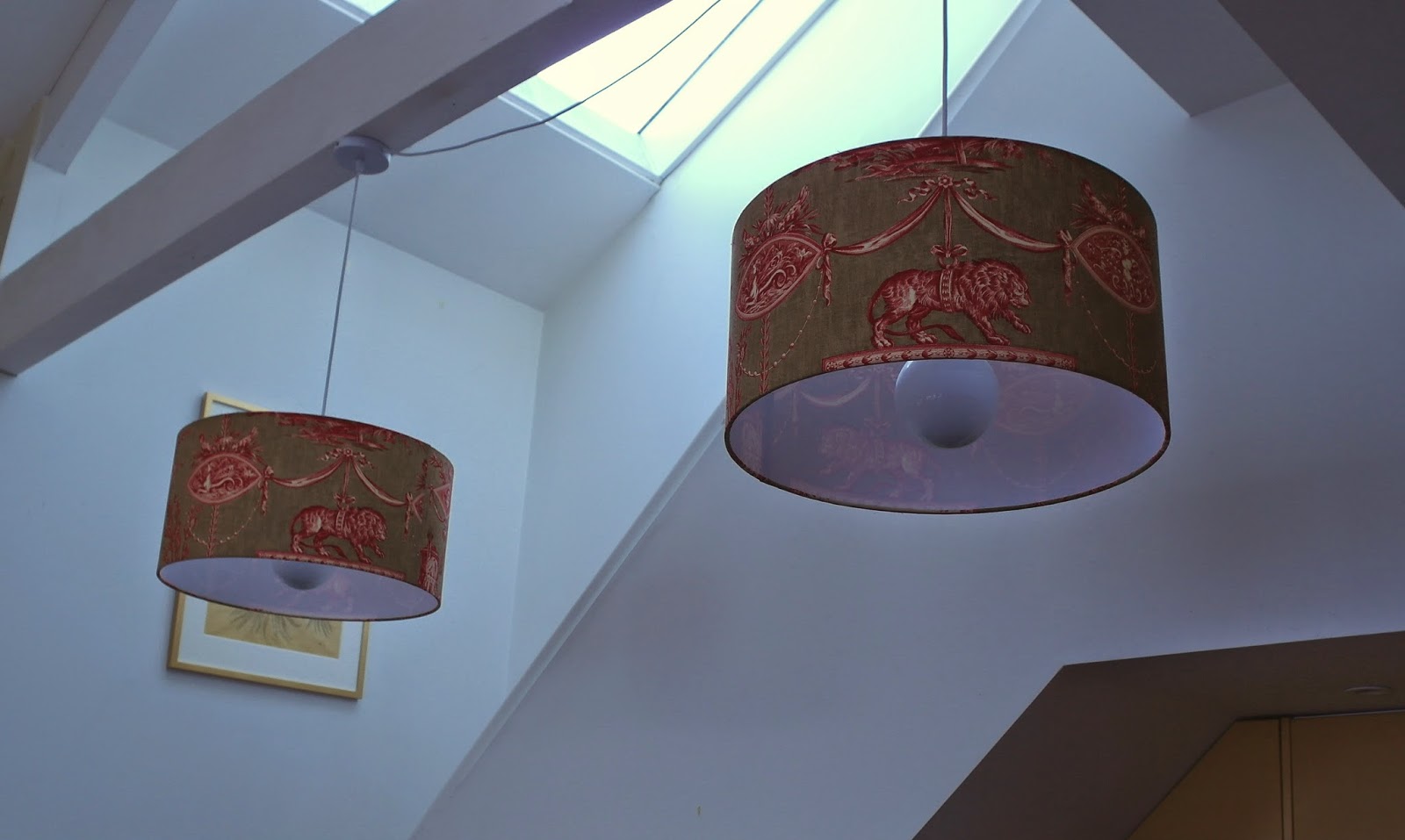 Aren't they pretty! Or elegant maybe!


I have the piece in the photo above left over, about 0.5m, which is not enough to make the enormous stacked piece of fabulosity I have planned for the beam over the living space, but I will not be thwarted! There's still some left in the shop.....

Weell, the Wellington Fringe Festival starts in a month's time, and while our original plans for a Constance driven cabaret have been canned, I am nevertheless appearing in a comedy show, as myself. 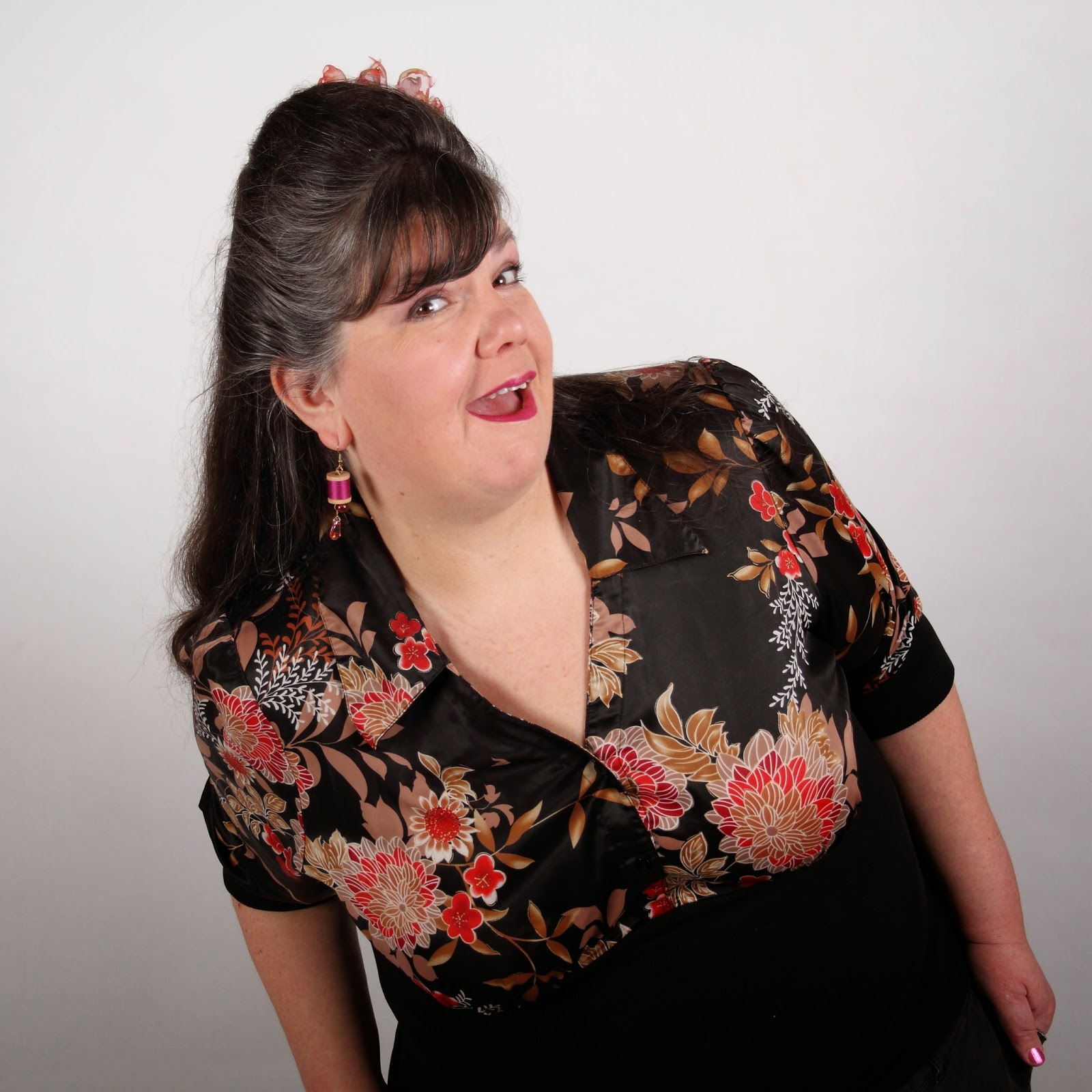 21 February, 9pm at Kitty O'Shea's, our show is one of the one hour slots of a series called One Night Stand (see how they did that?) which are one off gigs, hence the name. Hur Hur. Our slot is all about being female and over 40. With Caroline Welkin who is far more experienced than I am, which is a relief!
I'll be musing on everything from The Hobbit movies to 24 hour stay makeup. Issues that impact the over 40s.
I am still working on my material - my goodness it is more work than drafting an original pattern and making it up! A big part of the process is Hard Cases, an open mic night at a local bar. We all use it to test out out material on an audience. Tricky given most of he audience is young and make, which is not my ideal audience. But they are very understanding and laugh at my jokes sometimes, bless!

If my cheek were not so sore, I would place my tongue in it when I say that I have now reached the height of happiness by achieving my first acknowledgement on Recycled Movie Costumes.
Reader if you know not of this site, but you love a good costume drama (even if it's just for the costumes, lookin' at you Downton Abbey)  then do check it out. Its entire purpose is to identify examples of where a costume has been used in more than one TV programme or film. It is fascinating to browse though and see the examples - gowns from the 1969 production of Anne of a Thousand days turning up in The Tudors for example (this I find fascinating as the styling of The Tudors is so utterly indifferent to actual Tudor styling, the costumes also look completely wrong.) Shows even use the same costumes in different episodes on completely different characters.
Anyway, have a geek out if it's your thing.
My contribution came from watching Burke and Hare, a movie I didn't like one bit, but as Andy Serkis and Simon Pegg were in it, MrC wanted to watch it, so I just glanced up from my book to check out the costumes.
I could only identify one match, the dress at the end of this link, which had been spotted in many shows before. But I am sure there were many more - it didn't strike me as a very high budget job and there would have been a lot of specific costume requirements to use up the budget as it is.
This is the dress I spotted: 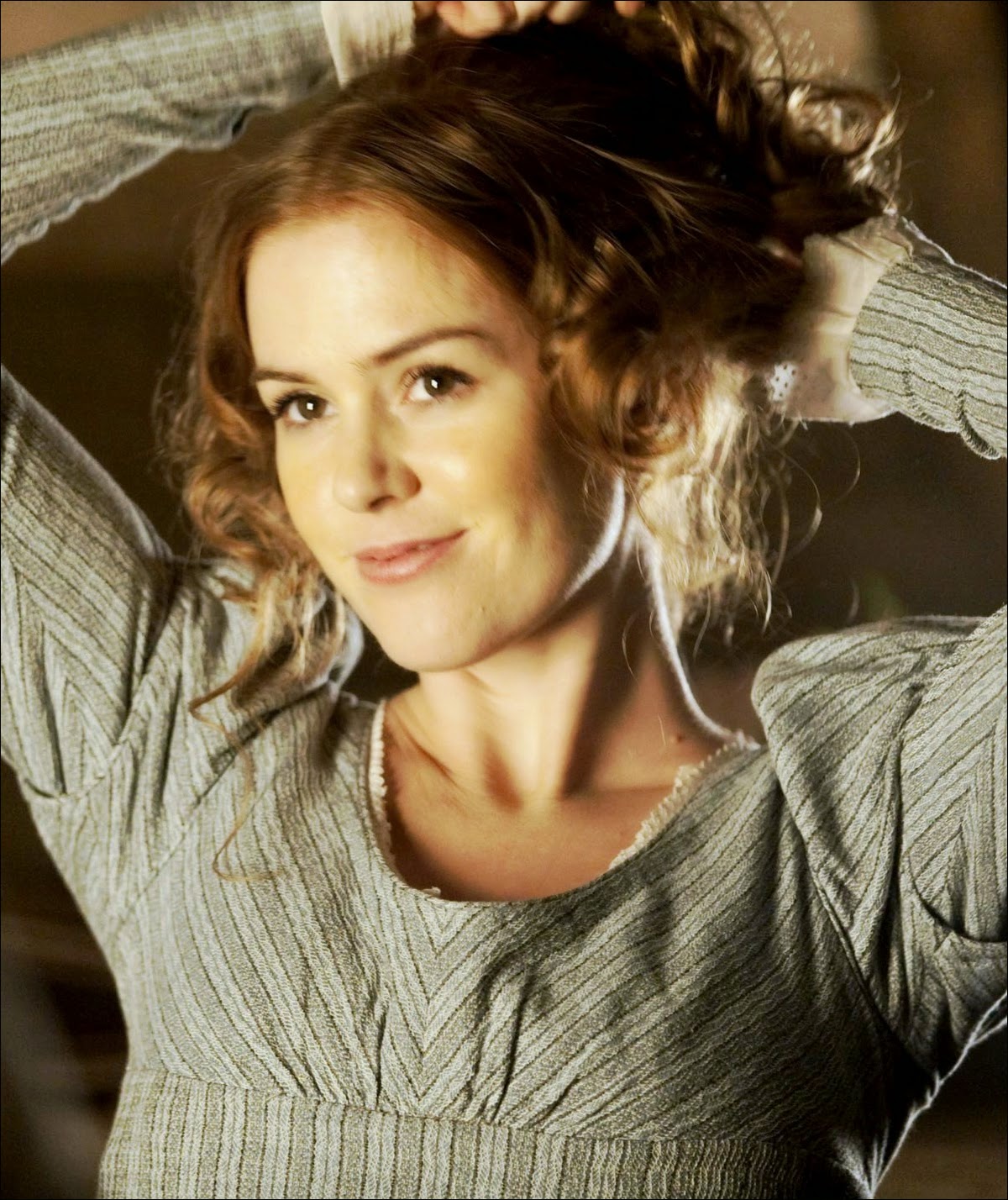 Being worn by Isla Fisher in Burke and Hare 2012 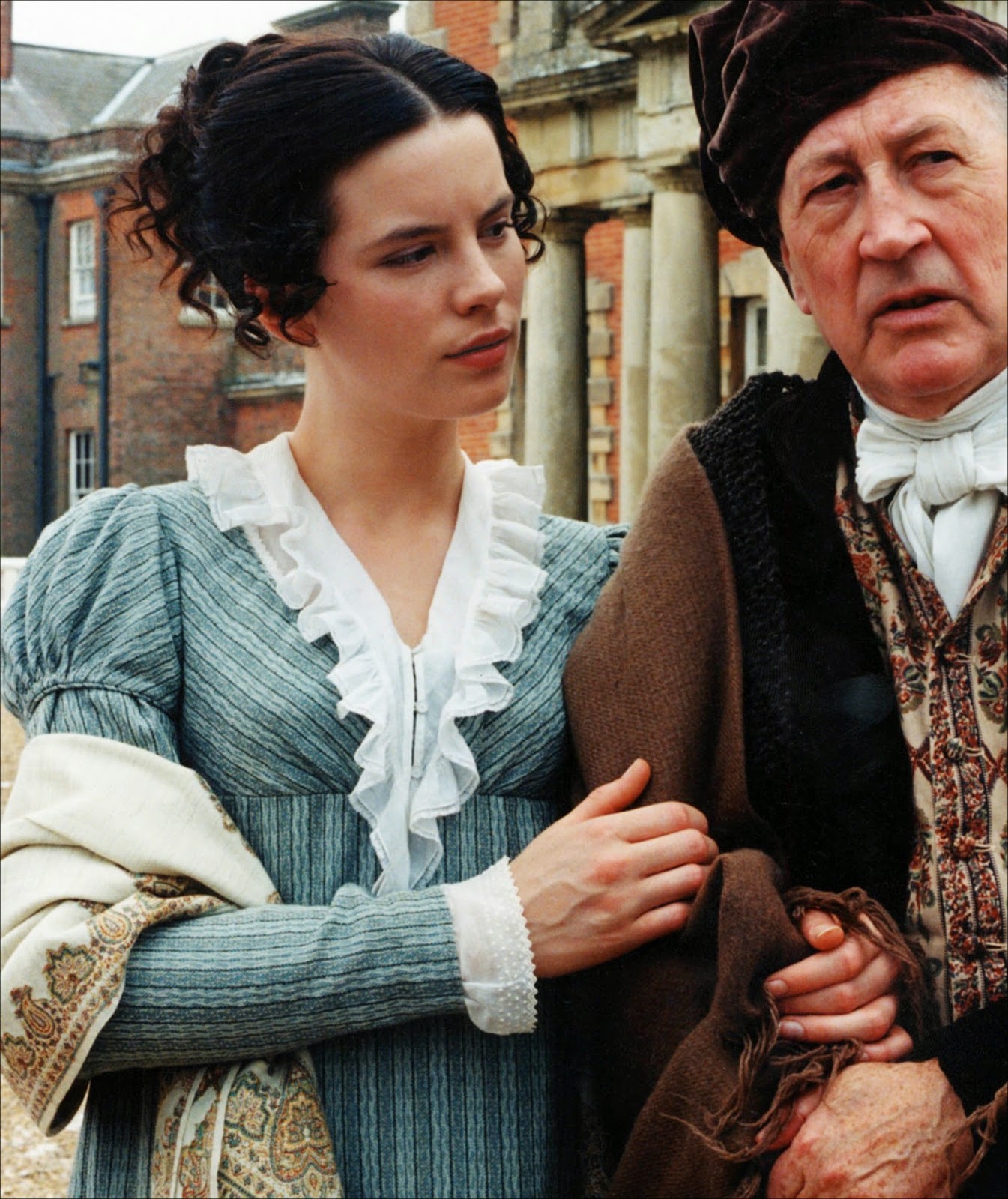 If I may geek out a moment, costume dramas seem to be divided into two types - ones which attempt to be authentic in their styling from clothing and hair and makeup to manners and modes in general. The Tudors is a perfect example of one which deliberately prioritises the current day over the past. Loose locks, bee stung lips, acres of cleavage on show, it is a disgrace to my mind anyway.
Of the other kind, I don't think any show has truly managed to recreate the time it was set or to avoid unconscious leakage from the time it was made. This production of Emma is a perfect example. In the mid 90s, brown was the new black, and vertical frills or flounces were very 'in'. the 'poet shirt' reigned supreme, with its circular cut front flounce. The costume as show on Kate above shows the latter, and the base colour of her entire wardrobe was brown. This floppy hat style is SO late '90s, but was it ever SO 1810?
So while it was technically much better than many, it is still unconsciously (I assume) of its time.
Anyway, I am very pleased with my acknowledgement - it is the second spotting I have submitted, however the first one had already been identified just not listed as yet. I still get credit for that if it ever DOES get credited.
If you are an afficianado of Regency costume dramas, I suggest you do a Google image search on this movie and see if you too spot any recycled gowns. This pelisse is tugging at my memory, not just because it is inspired by one on Patterns of Fashion 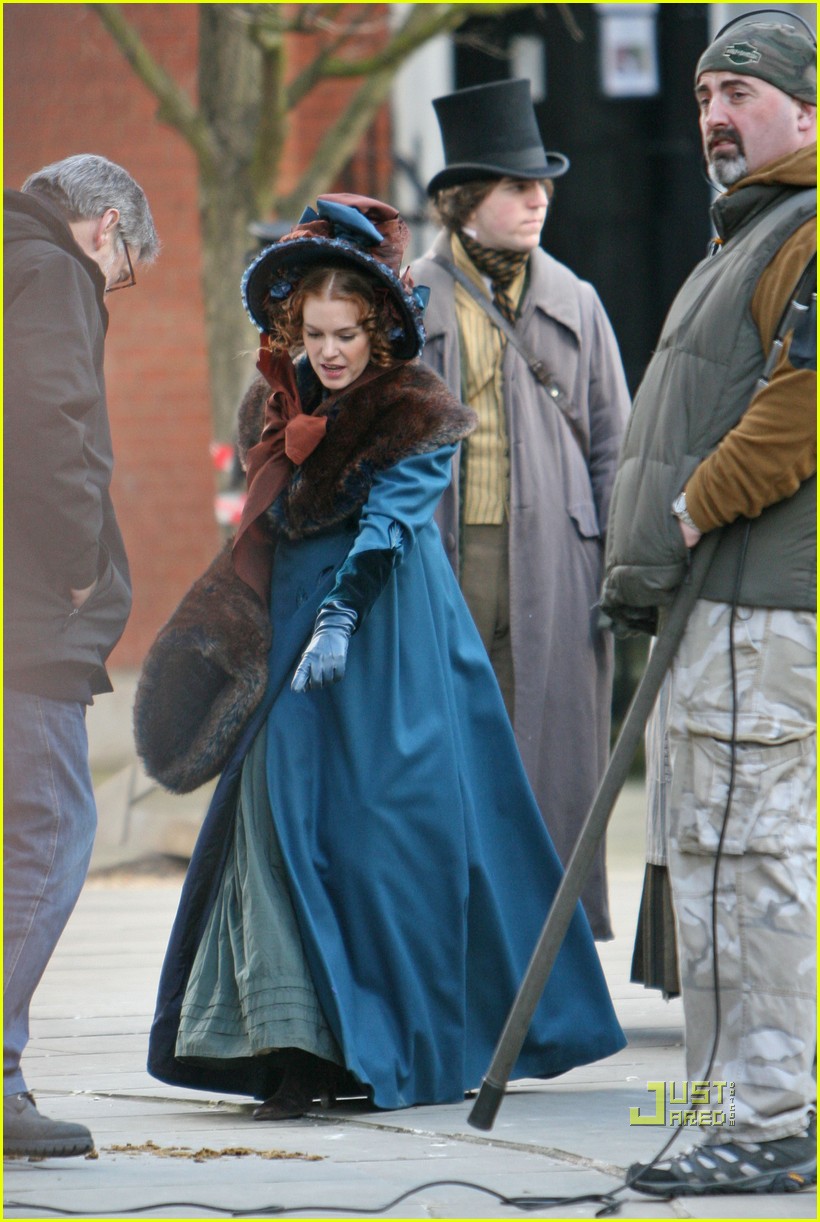 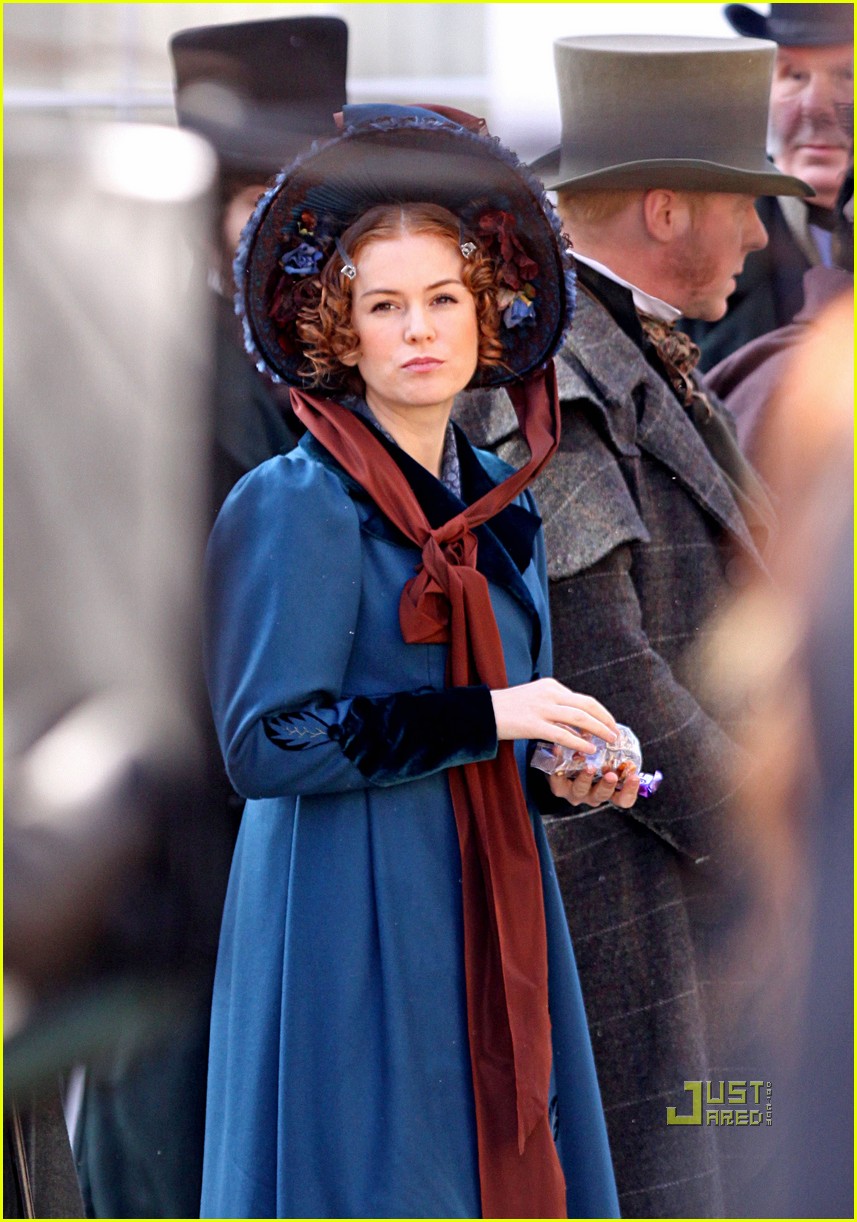 Two gorgeous pelisses on Isla Fisher and Jessica Hynes. Fisher's airforce blue pelisse with the distinctive laurel corded work down the front edges keeps tugging at my memory. either way it IS nice to see a massive fur muff in use, as was on trend at the time!

Warning: This post is not suitable for the squeamish!

Due to being chicken and not getting a broken tooth removed completely, I now have a face swollen up on one side like this.
I am curious as to whether it will stop trying to swell up more, as I don't really want my face to do a Mrs Creosote on me.
Oh well, off to the After Hours medical centre for some ABs, I think. I have comedy to write and a shop to run, no time for this bollocks!

A Partridge in a pear tree?

Happy New Year y'all! I spend NYD and the day after reading Amelia Peabody books. I was tired and slothful. A little voice whispered to me around noon on the 2nd: "Make a dress" NO!!! Shut up voice!! But in the end I came to a compromise and ran in three sundress bodices, as they were a bit (bilbo) baggy-ins.
This running in took very little time but it got my mojo going, and to the dulcet tones of Matinee Idle on the radio, I dragged one of last year's cut out dresses out of its bag, and whipped it up.
And here she is! 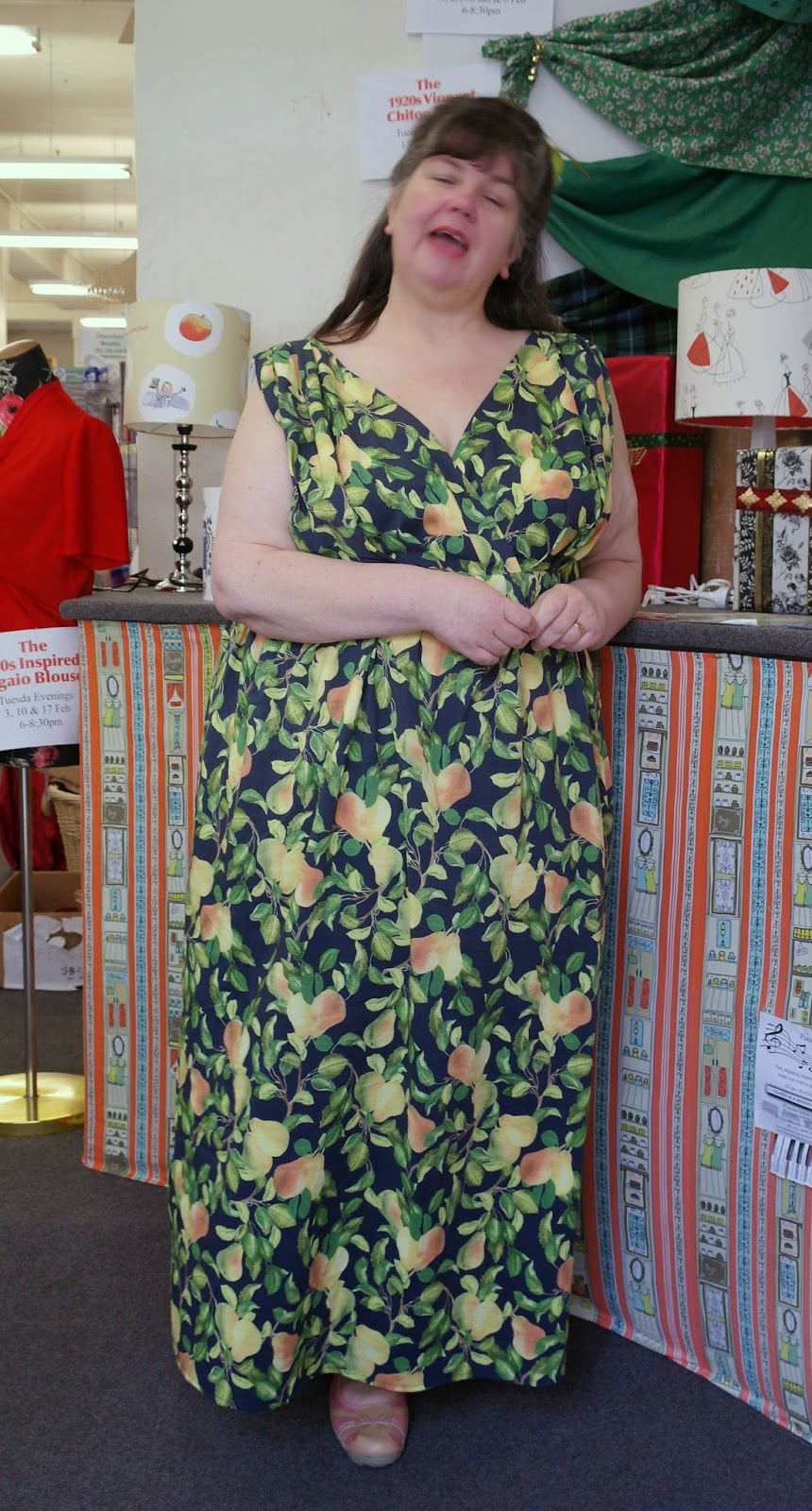 Partridge in a Pear Tree Dress.

This draped bodice maxi is my TNT - it is a three hour make for me now, and it is perfect for my need for very cool, interestingly individual dresses. It showcases a fab fabric and is very, very comfortable.
Hey if any of you want the pattern, let me know. It would be very much a starting point as you have to drape and fit a lot, but it an easy self-draft and drape so a good introduction to those arcane arts.
Cheers!