Well, I ended up doing four shows this week. For someone whose day job is 6 days, this was a bit OTT, but every single one of them was a fantastic opportunity I didn't want to turn down for a range of different reasons and so, I did them all! Why wouldn't ya!

Saturday 6 Feb was The British are Coming. I opened it with Mary Poppins - this photo is of my second appearance when I mussed up my costume quite a lot to reflect poor Mary's deteriorating state. Sugar is a dangerous substance, be warned! 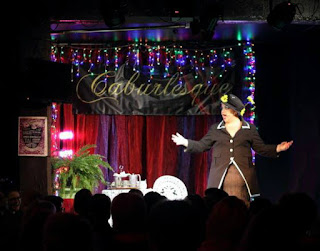 She was replaced after that routine by Queen Victoria, who turned out to have quite a dirty mind. Who knew those Victorians were so kinky? 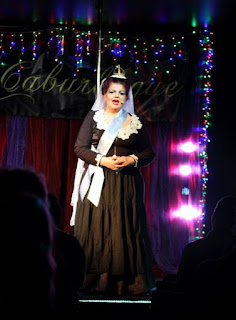 The second half of the show was opened by a jolly Britannia in Union Jack patterned Greek robes. but she only had a minute to enjoy Rule Britannia before someone changed the radio station to Wheels on Fire! 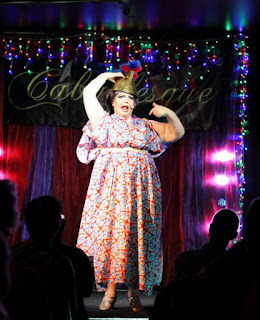 And underneath, she was Edina Monsoon. Looking a little People of Walmart, if I may say so myself. And Patsy - isn't she fabulous?! 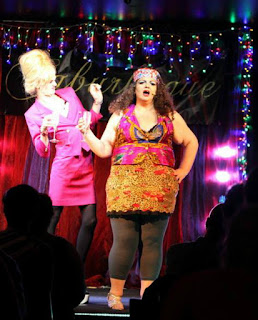 Wednesday 10th Feb brought the last fundraising show of J'Adore La Whore. Here's a shot of us all looking tres glam after the show:
left to right - Ellie Kat, Harlie Lux, Constance, Amanduh La, Marcella de Tella and Debbie our fabulous stage mumager. I am wearing an LBD and a sheer coat in black and gold borrowed from Amanduh. 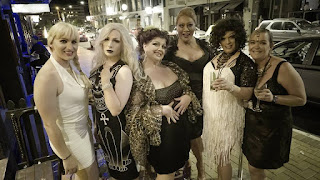 A half time shot of us all  - Harlie, Amanduh, Marcella, Ellie and me at the front. Don't we look like an outtake from The Great Gatsby! My flatter, wider hair do was to accommodate Mary Poppins' hat in the first half. Can I just add that Harlie is the sweetest, kindest, funniest guy but he is so nervous whenever anyone gets a camera out he can't smile! So he comes across as an ice queen. We'll learn him! 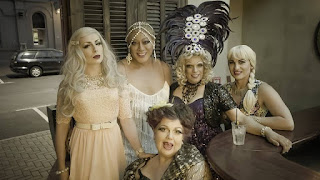 Friday afternoon produced a bonus opportunity to sing at my friend Tina's retirement party at the local College of Creative Arts. It's really hot here and afternoons are the hottest so I went with a new look, spesh since I had less time to get ready. I love the idea of scraped back hair that goes crazy curly at the back, and had a go with some new hair pieces, lots of flowers to hide things, and quite like the effect. The outfit is the LBD with the peacock embroidered net in a simple mumu type garment over the top, OVER THE TOP is right! 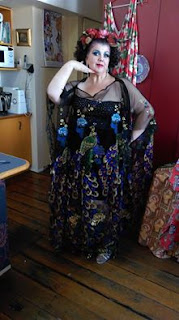 Tina and I - I am leaning down and she is standing on tippy toes! No wonder we're laughing! 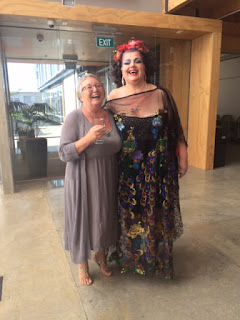 Funny story - I wear a corset with this outfit that I cannot do up for myself, which posed a problem getting ready at home at 3pm! Luckily our new neighbour Dan was in, and agreed to help. He was very gentlemanly, and I managed to arrange myself before calling him so he would not be embarrassed by any importunate glimpses!
This last one is a weird photo lighting wise and I am not smiling! David took it with my phone and, well, not his forte. This was before I headed out for the last show of the week, Queen vs Duke. The shiny cheek is a gold star - as I was singing Dream a little Dream I wanted to look dreamy and starry. I love my hair now!!! i managed to get it up more at the top, built it more evenly at the sides, and I used the organza flower necklace Mum made as the head piece.  Always learning! I also bought an eyeshadow palette of warm browns and bronzes and had a go with that instead of the purple or blue I usually do. Same outfit, I am in love with this outfit!!! 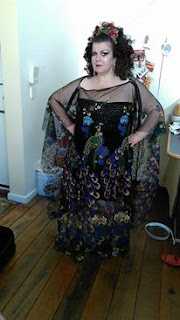 So, it's been a week of It. I got some good leads for both by businesses, had lots of fun, and now I am drying my newly washed makeup brushes, tidying away all my costumes which have been strewn across the living room for a month now, tidied away the makeup, and generally set my life up for normal for a few weeks until the Next show on 19 March! Assuming I don't get called on before ;-)

And what will I be doing until then? Making some dresses for ME!!!!
Posted by MrsC (Maryanne) at 7:26 PM 4 comments:

Last night we conquered the British, onstage at Caburlesque - the British are Coming!
Because the amazing Sadie von Scrumptious is American and knows what a Britophile I am, she asked me if I'd like to emcee that night instead of her. WOULD I!! Within an hour I had planned eight different characters I wanted to do Yup, it's my thing all right!
In the end I edited it down to four - Mary Poppins, Queen Victoria, Britannia and Edina Monsoon from Ab fab.
The last was inspired by having a young friend who does the BEST Patsy drag I've ever seen. Really for a 22 year old male, he can portray Patsy scarily well.
Did I get a photo of us together? Pfft. I am bad enough at all that but emceeing requires a lot of focus, and with me chucking in different characters, a choreographed finale that we never got to rehearse first, lots of music cues, and we had a last minute substitution in the cast too so it was pretty intense.
A couple of friends snapped pics, and here they are: 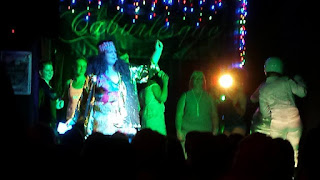 Edina, remembering she's a Womble in the finale 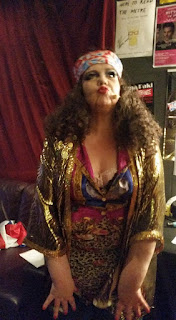 Backstage pic by Melody Riot - I am wearing a head mike which is why I appear to have a huge wart on my cheek!
Eddie is fun. The trick is to find a bunch of pieces that are styly and busy, and put them together so they clash. I had on a leopard and rose mini dress, a hot pink Hermes patterned waistcoat, dark green leggings and gold shoes. I donned the gold duster coat after my reveal. The hair was fun - curled hair extensions sewn into the inside of the Union Jack head band! Wrap it around, vecro at the back and instant long frizzy hair! It was good as I got to drink fizzy water out of a champagne flute and pretend it was Bolly.
Anyway, the official photographer usually has some pics for us within 24 hours but I know she had a wedding the day before and a pin up competition today, so it may take a bit longer for them to come through! I will post some when that happens.
Posted by MrsC (Maryanne) at 3:18 AM 10 comments: