I Feel the Earth. Move. Under my feet...

About 12.30am on Monday just as we were nearly asleep, New Zealand was hit by a 7.8 earthquake. It went on for over a minute, which for those of you who haven't been in an earthquake is about 25 "experience of being in it" minutes. The epicentre was off the cost of Kaikoura, which is on the upper North East coast of the South Island. It's the place you stop on the drive to or from the Picton Ferry for a coffee and to buy a crayfish, or to go whale watching.
Not for a while. The quake was the second largest ever to hit us since the 1920s. Or some such. Sea beds have risen, valleys have formed, it's amazing and terrifying. It was much bigger than the quakes that ravaged Christchurch in 2010 and 2011, just not centred somewhere with such dire consequences to an urban environment.
Meanwhile back in the Wellington CBD, we stood in the doorway listening to the banging and crashing go on and on and on and bloody on. When it finally calmed down, we went down into the courtyard with most of the residents of our complex, all trying to joke about it so we wouldn't scream or cry instead. In nothing but my robe, I went with MrC to the shop expecting a pile of rubble, but nope, a few unbreakables had toppled off the precariously made piles on the Christmas display. Out on the streets were groups of mostly young people in pjs, or wrapped in quilts, with backpacks. It felt like the Zombie apocalypse, sans Zombies.
Anyway, an hour of aftershocks and I was a mess. I rang my parents and we drove out to their place, which is on the flat, and new. And had brandy, it turns out. I say had, because the four of us finished the bottle before going to bed.
So, the CBD was closed on Monday, which is all very well but when 20,000 people live in it, what do you do?? We opened briefly but an aftershock was too much for me and I insisted we close again. Instead I spent the afternoon with my very calm friends Chris and Paul, eating chocolate and watching American football, and decompressing.
It has been BAU since then.
Except that several newer buildings in town are condemned, and none of the older ones which seemed to ride the rolling motion of this quake but maybe wouldn't handle a jolt from below? I'm not fussed about never finding out the hard way.
So, we here are now once again reminded that life on a sliver of land on a number of Pacific fault lines can be pretty exciting.
We are fine, if rattled; our business and home are fine. We do not mourn the two cheap wineglasses that broke, but we mourn the feeling that knowing we live on a fault line was an intellectual one, not a visceral experience.
The actual outcome is that the planned move of our business due to the building being sold earlier in the year, is brought forward to just after Christmas. The new building is newer, safer, and in a different if equivalently busy part of the city.
And last night in spite of it all, we did a show. More on that when the photos are available.
Right now I am going for a nap. I am really tired. Living on one's nerves for a week while getting a show onto the stage is a lot to handle.
TL,DR: Earthquakes suck, life goes on!

Today I did some catching up. It's my one day off and I am very particular about how I spend it.
First, I set a cake free. By now it is probably crumbs. 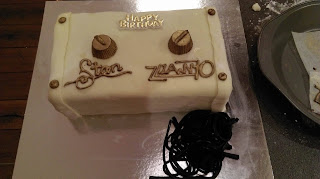 Not quite finished at point of photo but you get the idea.
Shopping for yummy fresh food from several amazing shops was fun. I got it into my head that I wanted to make a chicken pie. That meant: free range chicken thighs, likewise bacon, the holy Trinity of carrot, onion and celery, parsley, and lemon. I had the stock, pastry and other herbs already.
This of course wasn't remotely as a result of watching Pie Week on The Great British Bake Off. Nonono. I am also not obsessing over Bombe Alaska either. Ahem. 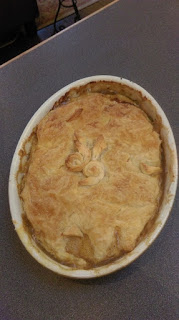 My chicken pie. No Soggy Bottom as it is just has a lid. Mary Berry you won't catch me out!

Anyway I also ironed a lot of shirts, (for brownie points), did a lot of dishes, and sorted a lot of messy paperwork and sewing stuff, and washed my makeup brushes. Which I do after pretty much every time I use them, because EEW.
For the education of those not into hard core makeup, I do this thusly: 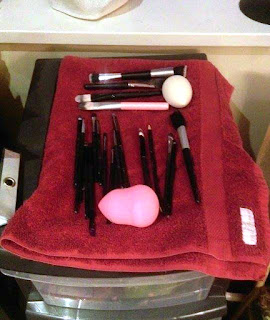 The trick is to not immerse the whole brush in water, as it weakens the glue holding the bristles and metal bit, and they fall apart. Ask me how I know.
So there you go, you (possibly) heard it here first.
Happy Sunday!

It's 7pm on Hallowe'en Saturday - I have four, FOUR places I could be tonight but the only place I want to be is here on the couch for as long as it takes to get to bed time, probably 9pm! NANA!!
I taught a class today, a new one about "Making a pattern from an existing garment." I had a lot of inquiries around this idea so I programmed it, two weeks in a row because of the demand and only being able to take 4-6 people, and both are full.
It was a fantastic class and reminded me how much I love to teach. No photos, as I am to busy doing the work for that.
But I do owe you some photos so here you go! 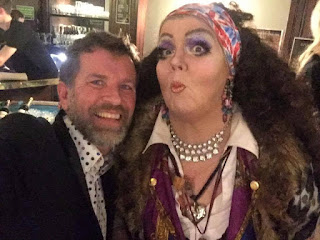 Me as Edina Monsoon with dear friend Ross. Friends for 38 years and counting! He came to the second evening of the AB Fab movie opening. Out of two 200 seat shows, only about 8 guys turned up! 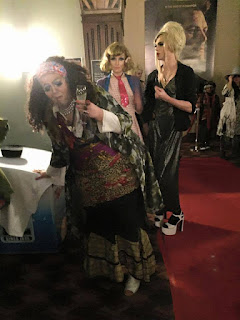 A little too much bolly. Jack was Patsy and Indy is Bubble. 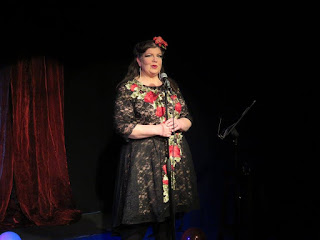 My black lace fit and flare dress - bought unadorned and then adorned with these lovely red rose motifs. It took me ages to sew them on but I love that kind of thing.

And finally THIS happened! Please note the total lack of sequins! 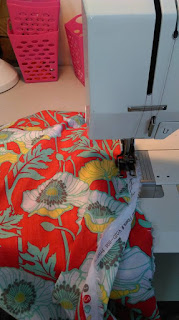 I finished the dress on Labour Weekend and have worn it since but so far no pics. I LOVE IT. Can't wait to show you!
We're in summer frock weather most days now, and the one I am wearing has rips under the arms. So three new dresses this summer, two more to go.
I'd best get on with it! My output has been pretty slow these past couple of years...