Readers, I am in the midst of planning my lecture this weekend at HandMade on Getting a Great Fit. It's a fascinating process.

The Patterns
I am using two patterns from two different companies, chosen because they are generic enough to use as a sloper for adjusting other patterns. This pattern Simplicity 2648 is an Amazing Fit style which means it has different pattern pieces for different cup sizes, and different skirt shapes. Personally, one glance at it told me it was not amazing at all, but that’s to be expected and we’ll look at what you can do to make it amazing after all.

Butterick B4443 is a great basic dress pattern. Unfortunately without a sleeve option.
What these patterns have in common - princess seams. I love me a bodice with princess seams. No cut gets a better fit. In today's world where we don't mess around with body shapers and girdles and corsets, our torsos are not rock hard, reliable, smooth plinths on which to mould a bodice, like they were up until the 1970's. So, a princess seam allows you to follow the contours of the real body underneath.
This morning we had fitting number 2 for the B4443, and it went like a dream. I am still working on how best to present the process in such a short time, Probably photos of the various bodice pieces side my side to show their development through the fittings. These I will post here when they are done and the lecture is done. :)
Simplicity 2648 is yet to have its second fitting. The first one turned up a lot of alterations needed, which is what I expected.
Come Monday, I promise to share my results with you all. :)
Posted by MrsC (Maryanne) at 3:45 AM 12 comments:

I woke up three days ago with a pain in my right hip that left me hardly able to move. Even after a session with my osteopath, it is still very sore indeed. So it is cramping my style and no sewing is being done, as I feel better moving not sitting anyway.
But on a much happier note, I have won a giveaway! Rachel at House of Pinheiro drew my name for a free copy of The Newcastle Cardigan from Thread Theory.
My initial response to this pattern was that it is too hipster for my 50+ year old beloved, but then there was another photo of it being modelled by an older man and I could see how versatile it is. That is exciting!
It's still not MrC's cup of tea, but I have other men in my life who I can truly see rocking this look. I can hardly wait to get cutting!
Posted by MrsC (Maryanne) at 2:17 AM 6 comments:

Not named because I am vowing never to make another shirt! The fabric is called Nevermore. Inspired by Edgar Allen Poe, it is a delicious collage of macabre elements and MrC and I are as in love with it as we are with one another! 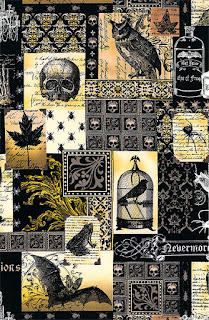 Nevermore - Quoth the Raven, from Michael Miller. The bird cages are about 5 inches tall. 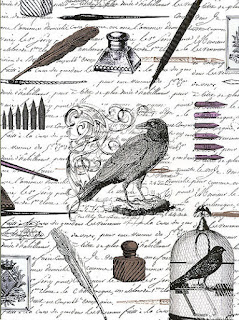 I also bought a yard of this, no idea why but I love it! Nevermore- Edgar's Pens. Yum.
This was another pattern matching mission though. Like the peacock fabric, it has no repeats across the width, only along its length, and so the two fronts were cut out in what looked like a mad and random way - the first at one end, the other floating around in the middle of the fabric a few feet further along!
Luckily, there was just room in the 3 yards to match the fronts and still cut out the other pieces.I have had to move the pocket down a little to match the pattern, at the expense of the turnunder along the top so I will have to fiddle with that. With the two fronts and pocket, that is three lots of repeats, and as the repeat is less than a shirt length, I really could have done with another, but I would have had SO much fabric left over, again. 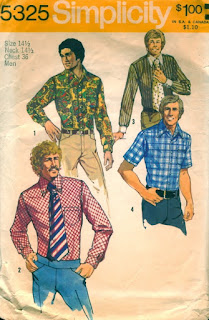 Source
My pattern this time is Simplicity 5325. I love this pattern, it is from 1972, and has all those great early 70's features like a slim cut and big collar. The collar has rounded points - I'll be sharpening them up however! And take a look at that tie - it is fully a third the width of the waist. Sexy...
Compared with our Goto pattern to date: 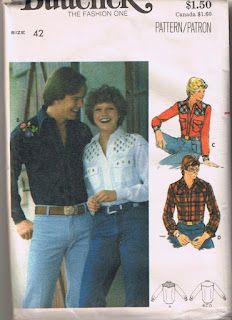 the shoulder is narrower but otherwise not a lot has changed across the decade in terms of cut.
What I particularly like is the "proportional sleeve" pattern piece - it is drafted to the longest length and has two places to shorten it. For my beloved long armed hubby, they are perfect just as they are! This little touch of acknowledgement that maybe people sew because they are not a standard size is something I wish we saw more of in today's patterns.
Anyway, all cut out now - no photos however as I left the darned camera at the shop.I don't have time to make shirts but I am just itching to create things!
The next step is all that fusing and marking. I really enjoy the preparations for a make - getting all of this done first really helps the construction to go smoothly.
Today I leave you with the other fabric I bought at the same time. I have not decided what to do with it yet: 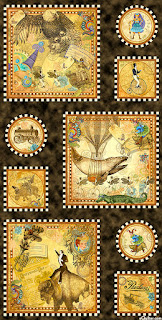 but I just had to get a panel. They are not the right shape for a tablet cover - perhaps an intrepid bag or, if David gets his way, the back of a waistcoat? :)