I live next door to a polling station and so didn't plan a particular time, so when the radio announced there was only an hour to go, I hopped to it!
I am so proud to be a New Zealand woman on election day. In November 1893, New Zealand women were granted the right to vote. Not the first country, but right up there. This on top of women who owned property and paid rates having been voting in local government election in some area of the South Island, since 1867. 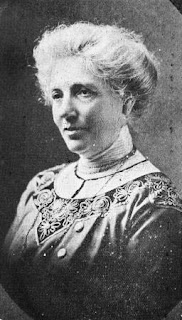 Thanks to good women like Kate Sheppard, the head of the franchise and legislation department of the Women's Christian Temperance Union, who was the most prominent leader of the suffrage campaign. Her portrait appears on our $10 note. 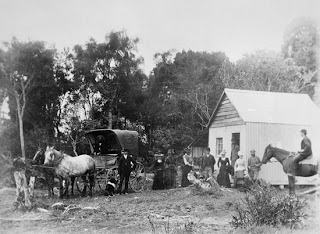 The site of the first polling station where women voted, at Tahakopa. It was a very dignified day with none of the predicted violence or hysteria.
Then in 1919, women got the right to stand for parliament. A right already available in some countries but a full YEAR before women in the USA were even allowed to vote. 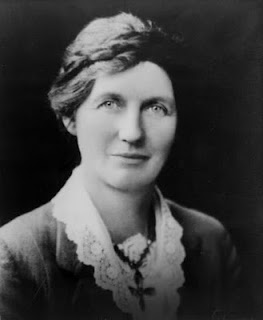 Elizabeth McCoombs, Labour MP for Lyttleton, the first woman to win a seat in parliament, in 1933. So the idea took a while to catch on.
A proud piece of history for a town that has felt the bite of the earthquake big time. 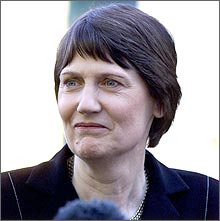 Also I think she bears an uncanny resemblance to Helen Clark, New Zealand's 10th Labour Prime Minister, and second woman to hold the role in a row (Jenny Shipley preceded her as National PM). Also, Clark is the one of NZ's longest standing PMs, at nine years.
So that is why I am proud to be able to pop next door and do my minute bit for democracy in this country. Women far braver than I achieved unheard of victories at unimaginable cost to themselves so that I could take it for granted.
Posted by MrsC (Maryanne) at 10:32 PM 3 comments:

In a week it is the opening of the White Room Christmas shop. In two weeks it is the annual DCM fundraiser Christmas market. And then there's the Big Day Itself.
I have to date prepared:
9 Christmas cakes - ranging in size from 4 inches to 10 inches round.
5 full sized Christmas puddings and 43 miniatures. About 3 large and another 8 dozen littlies to go
2 bags in a bag - I have a pile cut out and need to get my head down.
10 Christmas stockings
6 dozen non slip hangers - over half of which are already sold!
All kinds of other stuff.
And I haven't solved the what to mount the "fabulous but really quite worthless from a collector's point of view" 1970's Christmas postage stamps on so they can become earrings. I don't fancy noxious epxoy resin fumes and things. Anyone got any ideas?
This is my favourite time of year - making stuff that is just plain fun, making a bit of pocket money to spend on more stuff to make stuff out of, helping to raise a bit of money for a good cause, looking forward to the break.
I love it. Do you?
Posted by MrsC (Maryanne) at 10:44 AM 4 comments:

Totally and UTTERLY. What a huge day. Today was the culmination of 11 months' planning. Nearly 800sqm (8000sqft) of textile arts and crafts activity - exhibitions, vendors, clubs, demonstrations, classes, and a really top notch cafe. 36 stalls in all plus the extra things. We set up the tables, frames etc last night, and started again at 7am this morning, helping vendors and other clubs to unpack their cars and get set up so everything was ready by 10am. (To be perfectly honest and in a spirit of complete disclosure, I was useless and got sent home early the night before, as this coldy fluey thing is exhausting and I was just in the way!)
At 10am, there was a queue at the door! People poured in and it was like that most of the day. I taught classes in how to make a yoyo brooch (will do a blog on this, it's fun!) and there was felt bead making, needle felting, making a scarf using washaway, demos of every kind from embroidery, lacemaking, helping to put a quilt together, spinning, various knitting techniques, antique and vintage textiles; and supplies for every textile art and craft imaginable for sale. Except dressmaking stuff, not so much of that.
It was a busy, fun, amazing celebration of textile love. And we are already plotting how to make it bigger and better next time! And did I remember to take the camera? ARGH!!! So you will just have to believe me and hopefully someone else had more common sense :)
Update: Turns out of course lots of other people did! Including Jenny of Romany quilting.
Posted by MrsC (Maryanne) at 11:03 PM 10 comments:

What do the first eleven Doctors have in common? Apart from being interesting, smart, eccentric, clever, intrepid and English? They are all BLOKES.
Wouldn't it be nice if #12 was a woman. And not a skinny, pouty, collagen lipped Plastic, please. A real woman. Miriam Margoles, Zoe Wanamaker, Miranda Hart? That would be funny!
A few months ago, a few of us went out to take photos of The Dreamstress' creations; of Aline's dress and the Pink extravaganza, under the amazing lens of "Diane Villiers," aka Sarah. Usually I stick to hair and makeup but Madame O convinced me not to be such a sap and get dressed up too.
Wanting to show off my purple frock coat and my new top hat and goggles, I thought I'd have a go at creating a lady Doctor. 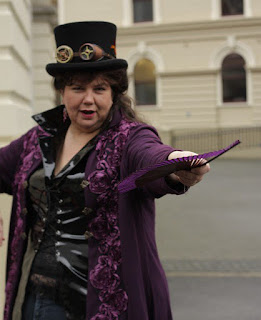 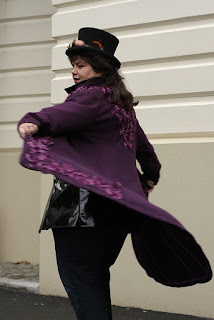 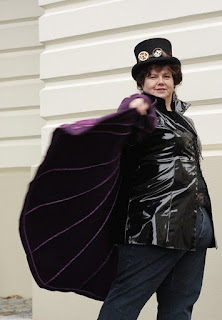 The all important reveal shot of all those Hong Kong bound seams. A huge job but I love the effect. And so nice to use a beautiful cotton print from my stash. 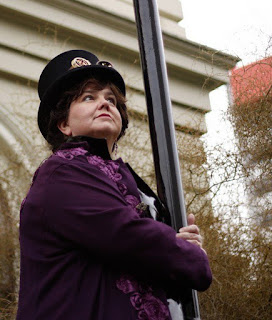 On the lookout for alien space ships maybe? 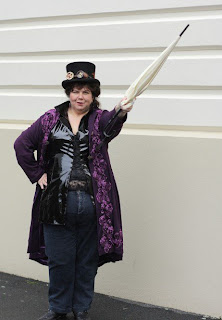 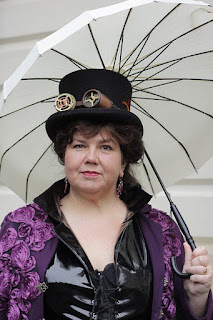 Meh, life in Space is tough. Sometimes a girl just wants to hang out with her pals and a parasol.
A lovely afternoon was had by all!
Posted by MrsC (Maryanne) at 11:58 PM 15 comments:

What a morning! Today was the biannual Fabric-a-brac, Wellington's own stash rehash market. Sewists of all kinds take a table and onsell their bits and bobs - patterns, fabric, wool, trims, beads, haberdashery, leather, the lot. I reckon it is my fifth Fabric-a-brac, and the first time since my very first where I was only selling my own stuff. Even I cannot generate a whole table of unwanted stash by myself in six months! 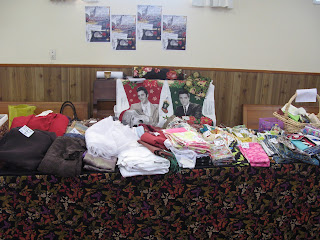 My stall at 9am, before the public were let in. I'd already bought and sold fabric by then! Note the Elvis Christmas stocking draped on the piano behind my stall. More about Elvis later. 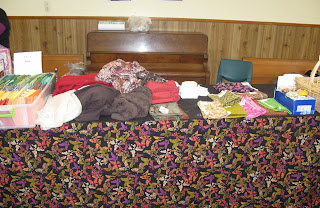 My stall at 12. I've let my neighbour encroach because I didn't have enough stuff left to even cover the table! and Elvis has left the building!
Elvis was a huge hit. My neighbour and friend Sue, bought him, but word had got out and someone turned up at my table to ask if she could buy him. I explained that I'd sold him to Sue, and we got him out to show her. The lady ended up convincing Sue to onsell him!
Anyway, I indulged myself just a little bit: 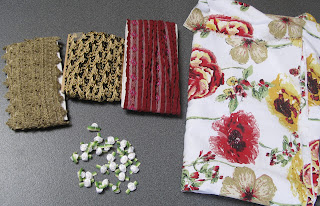 Gorgeous quality trims and wee rosettes from famous and fabulous Wellington designer Alison Blain whose table is my first port of call every time! The piece of poppy canvas was from my non-Elvis fancying side neighbour's stand. Enough to make a nice bag. 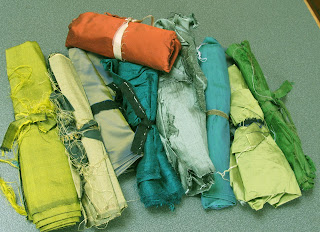 For the Embroidenator, a pile of dupion scraps in native NZ bird greens. She is making exquisite free motion machine embroidered birds for Christmas tree decorations. Not shown is a length of red/green shot organza and a whole roll of waistband lining tape for a mere $4!
Other highlights? I saw a young (early 20's) lass wearing a skirt in a fabric I remember buying in the early 90's, a strong and vibrant red and purple fabric reminiscent of Kaffe Fassett and Phillip Jacobs. It was very exciting to see it and it turned out that she had made it from a piece of fabric in her mother's stash. THEN, when I saw her with her sister and realised that her mother was a long lost friend I had bequeathed a huge pile of fabric to when I left Wellington, we realised it really WAS made from the same piece of fabric! Now isn't that just a little bit hilarious?!
A great morning was had by many - fabrics and bits found new homes and no doubt some will turn up again at future Fabric-a-bracs - such is the way of these things. As for me, as well as my small crop of treasures bought, I have a nice nest egg of funds to reinvest in long arm quilting, must haves and haberdashery needs, so I can keep to my zero budget :)
Posted by MrsC (Maryanne) at 9:15 PM 3 comments:

Last week after some number crunchin', soul searchin' type stuff, I was confronted with the enormity of the amount I spend on fabric. It is a lot. Two and a half times more than the figure I had generously guestimated.
So, before I turn into a crazy hoarding lady (yes well, some may say it is too late), I have gone zero budget. This means that I can only invest money I have earned from the supplies I buy into more supplies. So, income from crafting, stash rehashing and dressmaking is reinvestable. Income from real job is not.
I am cheating ever so slightly. Income from cupcakes is included, although cost of making cupcakes and buying cupcake supplies also has to come from the income.
It's been a week so far - an unusually profitable week as it turns out, and I am $90 up. Woohoo! And with Fabricabrac on Saturday, I should be even more in the black.
This is how I have justified buying three x one metre lengths of craft cotton and one x three metre length of silk chiffon today. Ahem. :)
Has anyone else ever tried any of this? I feel a little like I am abseiling here and some war stories would be comforting!
Posted by MrsC (Maryanne) at 7:53 PM 8 comments: