The Grand Tease Wellington - getting out of my comfort zone

I am very aware that my comfort zone of talking and singing to large groups of people off the cuff, is the stuff of many people's nightmares! But when I look at what most of the fabulous performers I know do, then I get the 'mares. Moving, using one's body to tell a story, not being able to rely on verbal wit - shudder. So, I ruthlessly put myself into the situation of giving it a go. In a national competition, As you do!
The Grand Tease is New Zealand's Burlesque contest, with heats in the main centres and a final subsequently held in Christchurch. Last night was the Wellington heat. Eight locals and an Aucklander who loves it here got on stage and did two acts each -  a "Classic" act and a "Neo" act.
Classic is about elements of tradition - feather fans, big band music, sequin gowns, sequin everything. In Wellington, we are not big on Classic style and it was a challenge for most. We're Neo-ists on the whole - Neo is a free for all of references to popular culture from movies and books and games to food to commentary on society. Costuming can be anything.
Happily, the performance order was the same in both halves so I had a good 45 minutes to change from one costume to the other, which included makeup.

Frame one - my Classic act. Frame two, back stage in my Neo act outfit.  Frame three, taken when I'm on stage.
Can you guess who I was in my Neo act?
Everyone really rose to the occasion, and all nine performers were just fabulous. I had no desire to go to the final as a performer, but I was utterly blown away to get these two awards on the night. Best Circus/Vaudeville and Most Innovative - two distinctions I really value! 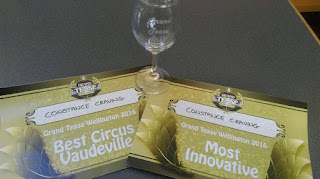 I am going to the final to support all of the finalists, but secretly to pump for Jena,  Debbie and Blu, representing Wellington. Jena is my "one to watch" and came away to Whakatane with us last year, Debbie is producer of Caburlesque and a "partner in crime", and Blu is one of those gorgeous people who makes audiences happy and that includes me!
As for the Mad Hatter, he is making a further appearance on 6 August at the Tim Burton tribute night of Caburlesque. With Mrs Lovett. I reckon if I can go from glamour to Hatter in 45 minutes, I can go from Lovett to Hatter in 25. Wish me luck!!

Suddenly, after three months of planning and practising and making frocky things, Frida was standing before us. We had a lovely drive up to Palmerston North (about two hours) and after sorting out the usual logistics, 11 drag queens settled in the green room to apply makeup. LOTS of makeup. 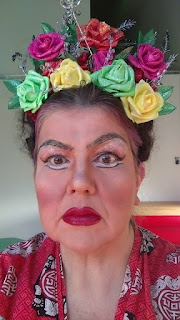 Me looking fierce! I was going for a slightly painterly look. I think it worked! Please note that the auto filter in my phone is still working, called "make me look like my mother" But that headpiece is my pride and joy! 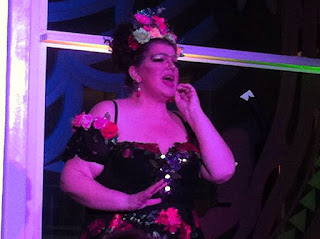 The opening number. Maybe you can make out the monobrow that I drew on in front of the audience as I discovered my inner Frida! 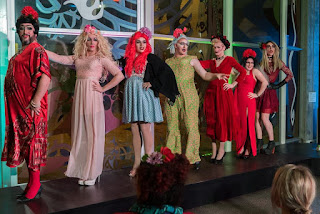 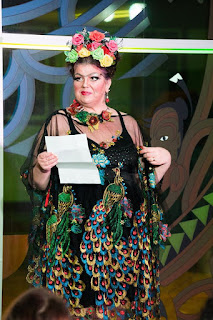 I changed into this half way through the second half. This number was La Vie en Rose, interspersed with quotes from Frida Kahlo about the nature of love. 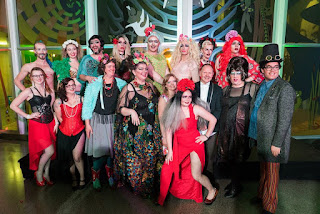 The gang! We performed in the foyer of Te Manawa Museum, in front of this beautiful window. It really was something. 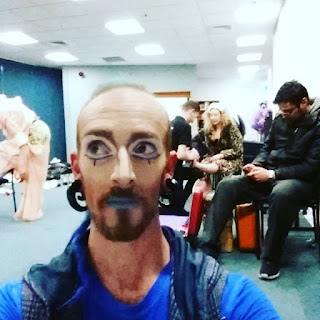 This is Douglas Sievers Jarrett, pole dancer extraordinaire and the loveliest guy - he is a local and looked after us so well. 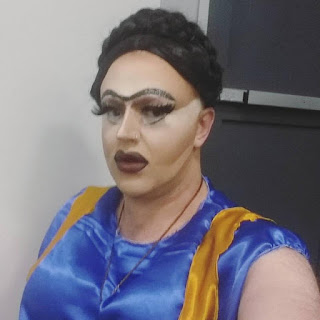 Stephii as one of the two Fridas from the painting. Stephii is a graduate of our NZ Drama School's Costume Design course, and makes amazing costumes. She won Mx Capital Drag 2016 and deservedly so - a real powerhouse on stage!

So after a terrible night's sleep because of high heel induced leg cramps and coughing fits (the hotel was gorgeous such a pity!) LaQuisha and I went out for breakfast and eventually a group of rather tired and subdued but happy young men joined us. It was quite a trick sitting outside a cafe in Palmy with young men applying makeup, not something the locals are used to. They all caught the bus home while we drove back.
It was an epic show and a magic weekend, but it left me with another bout of horrible cold. I am now on antibiotics and already feeling a little more human. Today I even went into work and organised three new gigs, as well as the usual workaday things I do. Nothing flash though.
So, on the 23rd I have my next gig, I am sure I will be fine by then. I've even nearly completed my costume, and practised the routine!!
Posted by MrsC (Maryanne) at 3:52 AM 8 comments:

ooooh lala, my Frida costume is looking incredible. I do feel it more a tribute to some unmade Disney movie about a Spanish Princess, but I can live with that. It's a colour thing - when you get that much floral action on a black background.
Anyway here is a bad Phone Photo of the bodice. 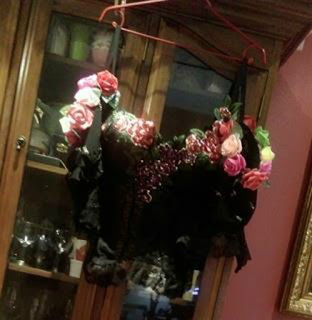 The 3d roses go along the tops off the off the shoulder puffy sleeves. The colours are much brighter in reality but I love the old peony colours of this photo. The skirt from last post goes OVER this, and the black of the waistband blends perfectly into the black of the bodice, so the sequin flowers float over it. Delicious
People I think I have finally worked it out. I love dressing up! LOVE it! Performing is the best excuse to make and wear gorgeous things. It suddenly seems so obvious!
Anyway  to my friends in the Us, have a great 4 July holiday, to the rest of us, have a lovely week xo

It's all on Chez Iron, getting costumes and props ready for the Viva Frida! show at Te Manawa Museum in Palmerston North. Only days away! So this today's job has been making my skirt, out of the most delicious sequin net, resplendent with massive sequinned flowers in sunset hues.
My idea was to mount a full circle of the net onto 75mm black elastic, because my waistline is so very variable. It is going on over a black corset top so the blacks will blend together.
However, I want the flowers at the top of the skirt to sort of blend into the top, as if it is all one. So, tonight I am hand stitching flowers over the join. To maintain the stretch, I've popped the whole thing over two chair backs arranged in a triangle approximating the circumference of my substantial waist.
I'm trying out the camera on my laptop thing. The light is quite odd as I have a mega bright work lamp pointing at it. Anyway this is what it looks like, complete with my dressing gown clad knees. 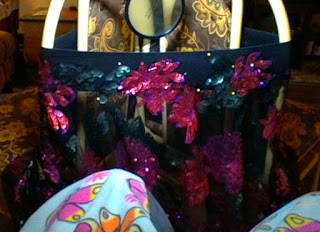 The magnifying glass is one of the things attached to my lamp - it doesn't really do it for me so I've pushed it out of the way. You may be able to make out the tops of my pins as I've yet to sew this lot of flowers down. Nearly half way.
It's quite surreal sitting here typing this in exactly the same position as this photo, so my view is your view.
The net where not sequinned is very sheer, but I am floofling it out with another skirt of mine made from black silk chiffon over burgundy satin. I wore it last in 2007 and am quite pleased I hung onto it now!
I think it will be worth it. The whole costume is so OTT, even for me! More soon! Enjoy your weekends!