Hello, good morning and Feliz Navidad. It's 9.30 on Christmas morning and we are off soon to brunch with delicious friends. 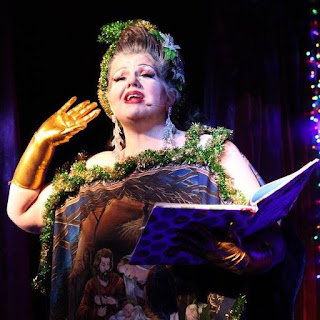 I left the window open in case I could hear Santa jingling across the sky. I didn't, as it happens...

However you choose to spend today -with friends, family, Netflix - I hope you enjoy it. It's all we human beans can hope for, and things are what we make them. xo

Preparing for take off!

Well I went quiet for nearly a month. It's been off the charts busy!
Gigs - Viva Frida, Caburlesque's Christmas show, two extra cabaret gigs, the Wellington Quilters Guild, The Wellington Comedy awards too - I was nominated for the best MC award, which was uber cool.
All the while we are preparing to move, probably not putting enough into it in terms of letting all the right services know and nailing the details. But it is Christmas trade and it is finally picking up after the quake put the city into hiatus for three weeks.
So, here's my last four weeks in photos: 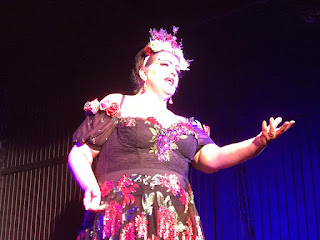 Crazy Frida outfit for the first half of Viva Frida 19 Nov, Photo by Jac Lynch 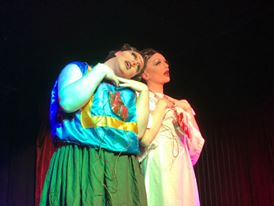 My two Christmas costumes for this season. The above was an appallingly ugly nativity panel I saw at Voldemart and an hour of sewing later, I had a new costume! Photo by Paradox Photography 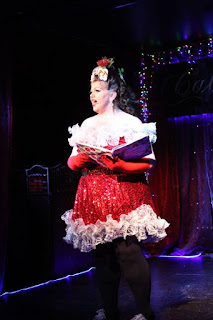 Last year's Christmas costume - taken in, lengthened a little and the feathers replaced with vegan friendly silver embroidered organza frills. In both these outfits I have my legs out, which is something I've grown comfortable with only this past year! Photo by Paradox Photography 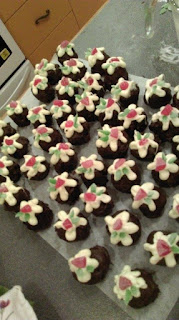 Made on a stolen afternoon - 70 tiny chocolate dipped Christmas puddings. It's been pretty tough here with the post quake fall out and I've not felt the Christmas spirit kick in, but making these like I have nearly every year for the last 20, really helps. Rituals have their place! 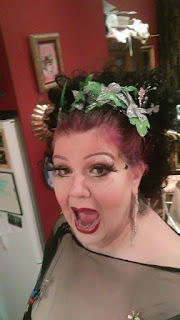 A selfie before I headed out to the Wellington Comedy Awards. I didn't win my category - Jerome Chandrahasen did and he is FANTASTIC. I was totally blown away to even be nominated as all the other nominees were stand up comedians. 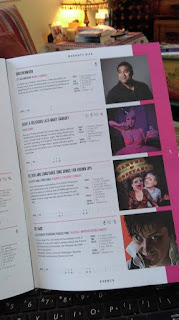 Our Fringe Festival show listing! Quite exciting seeing it in print! "Our" being mysellf, or Constance Craving, and Clever Hansel. 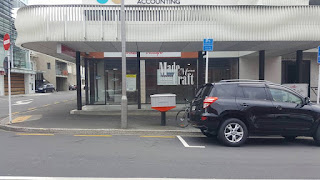 Most definitely not least, our new shop at 100 Tory St. The signwriters put up the new window decal this week. Since this pic was taken, the annoying builders' sign has been moved. Actually they are fantastic builders - they have four weeks only to pullout walls, fix the floor, put up new lights and ducting, new walls, and make it all ready for us. On Friday they were grinding the concrete floor ready to polish it. I've chosen a really simple, industrial feel for the studio area as much to get it done faster. The other part of the shop had big terracotta tiles and we're leaving them in place.
Photos of the interior when we get in there!

Our new branding! We can't be Made on Marion if we're not ON Marion any more. So,  we're now Made Marion Craft physically as well as online. Greg from Ash Creative did the design- my brief was that we really like what we had and didn't want to change it but we wanted to change it. He actually understood what I meant and I think he did a great job.

So, that's a bit of a whirlwind tour. I didn't hold a Thanksgiving dinner this year, it was all too much. I am so tired, and as a friend said, "white knuckling" it right now. My to-do list is a mile long,with a family wedding in March,fringe show to write, shop to move, but I am blown away as always by the people willing to help us pack up and unpack. Friends, customers, one and the same. We have a lovely team of professional movers coming in on the 29th Dec so that gives us three days to pack. BLOOMING HECK. It will be fine, it will be fine, it will be fine...